At the end of the 20th century, it was decided to intervene comprehensively 200 hectares of industrial land in the Poblenou area. With the aim to preserve the productive character of an area that had been the epicenter of the industrial revolution in Catalonia.

The result of this is the 22@, one of the first districts of urban innovation in the world. The 22@ was conceived the following fundamental features:

Since the 20th century, Innovation Districts have proliferated throughout the world, unlocking other urban typologies of innovation based on large areas far from the central cities (Silicon Valley model).

In The rise of innovation districts, of Bruce Katz y Julie Wagner for the Brookings Institutions, the authors define these environments as

"geographical areas where leading-edge anchor institutions and companies cluster and connect with start-ups, business incubators and accelerators. They are also physically compact, transit-accessible, and technically-wired and offer mixed-use housing, office and retail"

Innovative Districts encompass physical, economic and relationship elements. If one of them is missing, the ecosystem dynamics do not occur: the competitive advantage of being where things happen. 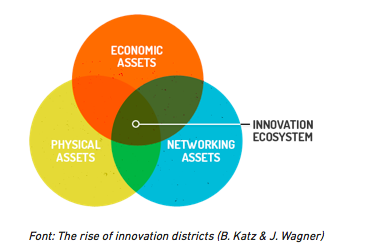 Do you want to stay updated on the latest news and events in the 22@ district?

According to RGPD, we inform you that your personal data will be included in a personal data file which holder is Associació d'Empreses i Institucions 22@ Barcelona, in order to maintain a directory of companies and entities related to Poblenou and to send you information of interest to you, and will not be disclosed to any person or company, nor will they be treated outside of these purposes without your consent. You have the right to exercise your rights of access, rectification, opposition, limitation, portability addressing to the email address info@22network.net (attaching a copy of your ID). You have the right to submit a claim to the Spanish Data Protection Agency when it deems appropriate. More information of our Privacy Policy here.